This is by far one of my favorite cities to visit and was so lucky to have been able to call it home before we made the decision to move to the Bordeaux region.

These are my suggestions for your visit in Barcelona, please feel free to message me for more suggestions or if you have any questions.

Arriving into Barcelona by train is simple, Barcelona Sants is centrally located and it is a nonstop six-hour trip from Paris for around 80 EURO each way (some deals for under 30 EURO can be found). From Bordeaux it will take just as long, if not more, and will require a transfer. Train bookings open up three months prior to date of departure.

Flights are equally simple and cheap, Vueling and Easyjet can have nonstop flights as low as 20 EURO each way. Once you leave the airport, the AEROBUS can take you to Placa Catalonia starting at 6 EURO. Taxis are cheap in Barcelona as well and will run you around 20 EURO from the airport to town. UBER doesn’t exist, so you would want to download the local versions app Cabify.

Driving is another alternative which allows you to explore the beautiful Costa Brava coastline between France and Spain, as well as take side trips to Romain ruins at Empuries or the Scala Dei vineyards of Priorat. Parking in Barcelona isn’t hard and there are plenty of parking decks starting around 18 EURO a day.

For the metro, buy a T-Casual ticket with ten trips for 11.35€ from any machine in the metro. Make sure you don’t bend it or keep it next to a magnet.

As I am a food-centric person, you’ll have to excuse the fact that my trip primarily revolves around meals, markets and snacks! You have to take the time to visit at least a couple of markets. Each neighborhood of Barcelona has a market, at least one, and they are impressive. The quality and vast range of products will make anyone with a kitchen happy! Plus the prices, if you’re coming from France.

The Boqueria, on the Ramblas, is probably the most well known and visited market. There has been a market on these premises since the 1217, when the local farmers would pull up with their produce to sell. The current structure is from the mid 1800’s and is beautiful. I’m sad to say, however, that over the past decade the number of authentic stands (not dedicated to tourism) have waned dramatically. If you want to get a sense of what the market used to feel like, go early in the morning (aim for 8am) and after walking around, stop at one of the counters, order una cana (beer) and a plate bunyols (fried cod fritters). The fish section of the Boqueria is incredible, but due to high numbers of tourists the fish mongers will prefer if you refrain from taking photos.

If you want to visit a local market less frequented by tourists, try the Mercat Santa Caterina in La Ribera with it’s tiled roof of a pixelated image of fruit and vegetables, or head to the newly renovated Mercat de Sant Antoni in Poble Sec (great neighborhood for tapas hopping).

If the Ramblas is the Times Square of Barcelona, then El Born Neighborhood is the Brooklyn. It is a really fun, hip place to be with beautiful streets to wonder through, a chocolate museum and school and a covered market that has been turned into an archeological museum. Bar del Pla is perfect spot to grab lunch or dinner, with classic tapas but also creative additions in a traditional bodega setting / Carrer Montcada, num. 2, 08003, Barcelona / +34 932 683 003

The Gotico neighborhood is where a lot of shopping can be had and where the beautiful Cathedral Santa Cruz is located. During the Christmas season, a giant caga tio (excellent video by the late Anthony Bourdain) is placed in front and you can watch local children stand in line to beat the log…as we would line up to sit on santas lap. If you don’t know about the caganer or caga tio, watch this. It’s the most unique European Christmas tradition I’ve seen yet.

If olive oil is your thing, and this would be the traditional cooking fat of Spain, then OroLiquido is a must. The owner, Ana, has an incredible selection of oils from all over Spain and Xavier (who also has his own olive oil farm BOOC) will be happy to take you through how to taste the different varieties / Carrer de la Palla 8, 08002, Barcelona / +34 933 022 980

There are so many shops, contact us for ideas based on your preferences!

There are so many amazing museums, but book in advance anything possible, like the Picasso Museum and Sagrada Familia. My personal favorite is the Barcelona City History Museum to follow the centuries of development in the city. Placa Espana is a beautiful walk after enjoying tapas all night in Poble Sec, a walk up to the National Museum of Catalan Art is scenic. There are no longer bullfights in Barcelona, but you can visit the old Monumental bullring and museum (located near to Sagrada Familia).

There are plenty of great hotels in Barcelona, but the most important part is choosing the right neighborhood. Avoid Raval, as it is changing but you might also still find shady characters and goings on. The Gotico can be too crowded and while generally safe, is best avoided. The Ramblas, like Times Square, is an invitation for pickpockets as well as visitors. Airbnb and VRBO are a great option in Barcelona, because the ability to use a kitchen and work with all the amazing products is a treat!

If you want quiet try the neighborhood of Sant Gervasi, near metro stops Muntaneer or Sant Gervasi, which is residential and completely dead on Saturday afternoon and Sunday, but is only a five minute metro ride into Placa Catalonia. The Mercure is clean, safe, offers parking, and has a great breakfast / Via Augusta 127HB003342, 8006, BARCELONA / +34 932 094 511

El Born will be lively at night with plenty of bars and clubs, so be aware of who your neighbor is to avoid loud music and yelling in the streets, which is the same to be said for Barceloneta (not great for distance from metro). Eixample is safe, residential, as is Poble Nou which is also close to the beach and much calmer. Escriba, a master of pastry in Barcelona, has a wonderful paella (not local, Valencian origins) and fiduea (Catalan version of paella) restaurant on the beach Xiringuito Escriba Avinguda Litoral, 62, 08005, Barcelona / +34 932 210 729

This list is just a taste of what there is to be had in Barcelona. First lets talk cuisine. You’re in Barcelona, so Catalan and Molecular cuisine are king. Make reservations at any place listed, if possible.

While Barcelona is in Spain, their identity is Catalan which is a region reaching to the Pyrenees and South of Barcelona. The local language is Catalan, with many older people speaking French as a third language and the younger generation speaking English. There is fierce pride in their language and identity after decades under authoritarian regimes that tried to erase their language and culture. Catalan cuisine is unique in many ways, the influence between the border with France might be the biggest difference between their food and the rest of Spain. Their love of mar i muntanya (surf and turf) will be immediately noticeable. The five sauces you will find in nearly any traditional dish – romanesco, sofregit (sofrito), aioli, picada, and samfania – really characterize the dishes.

Classical Catalan at Freixa Tradicio was my favorite, but it has since closed (2018). Modern Catalan can be found in many places, but the two OG’s of bistrionomic cuisine in Barcelona would have to be Embat and Gresca.

Most people have heard of El Bulli, that institution and birth place of molecular gastronomy in the hills by Roses on the Costa Brava. Gourmet magazine referred to Adria as “the Salvador Dali­ of the kitchen“. Thanks to the Adria brothers, the look and feel of food has been forever changed. Ferran Adria is still active in the culinary world, many restaurants in Barcelona will say how he has come to their establishment to dine. However, the new head of the Adria empire is Albert with elBarri restaurants. From the circus-styled taperia Tickets to the modern take on Mexican at Hoja Santa, your senses are sure to be simultaneously tricked and pleased.

El Bulli produced not only impressive food, but incredible talent like Akreme Benallal whom I had the privilege of staging with in Paris years ago. The whole city of Barcelona is filled with restaurants that have chefs who either worked at or staged at El Bulli…from Disfrutar to Alkimia.

One of my favorites, is Pakta of the Adria brand. They do Nikkei (Japanese-Peruvian cuisine), lots of small plates with great flavors and unique techniques, excellent service and a wonderful Japanese whisky menu / Dinner only Tuesday-Saturday / C/ Lleida 5, 08004, Barcelona / https://elbarri.com/en/restaurant/pakta / +34 936 240 177

They may not be Catalan, but Spanish tapas are everywhere…alongside their Basque cousin, the pinxco. So, where to try them? Head to Poble Sec, one of the more up and coming neighborhoods that has transformed immensely in the last five years.

A great place to start, is Els Sortidors del Parlament will have barrel tables near the front and long wooden tables in the back serving up typical Xarcuteria plates and formatges, little bowls of local Arebequina olives and pa amb tomaquet (bread with tomato). Take a glass of the house vermut or local beer and take in the locals laid back ambrience / Carrer del Parlament, 53, 08015, Barcelona / +34 934 411 602

Afterwards, if you can get in, try Quimet y Quimet if only for their smoked salmon and truffled honey. Then head to Carrer del Blai and grab a little of everything…the street is filled with spots for tapas.

If you want more restaurant recommendations, please send me a message with the dates you’re going and budget. 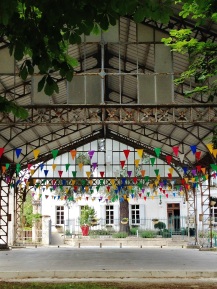